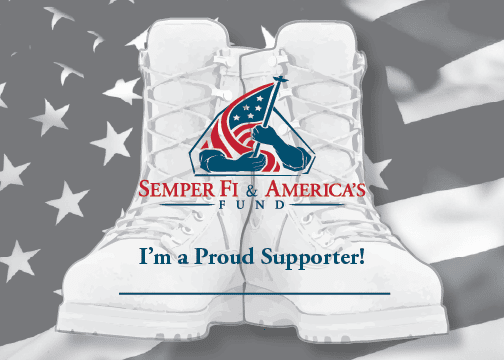 WHITEHOUSE STATION, NJ — QuickChek Corporation, a market leader in food service dedicated to serving its communities, is raising funds to help provide immediate financial assistance and lifetime support to members of the U.S. Armed Forces and their families through an in-store donation program.

Customers are invited to purchase paper boots for $1 or donate their spare change at any of the company’s 156 fresh convenience market store locations in the metropolitan area now (June 12) through July 10, 2021 to benefit the Semper Fi & America’s Fund, a non-profit organization whose mission is to deliver the resources needed by veterans during recovery and transition back to their communities, working to ensure no service member is left behind.

The Semper Fi & America’s Fund is run by military spouses and former military members who have been in the trenches and know firsthand the needs of its families in “serving those who preserve our freedom.”

The in-store fundraiser will benefit combat wounded, critically ill, and catastrophically injured members of all branches of the U.S. Armed Forces and their families.

The Whitehouse Station, NJ-based fresh convenience market chain has raised more than $1.54 million to support local veterans and their families since 2009, including more than $825,000 the past seven years through this in-store promotion, an annual golf outing, and the Long Island Run for the Warriors.

“We are pleased to continue our support of our Service members and their families and we’re proud of the continued support we receive from our customers who share our goal of aiding members of our local communities in their time of need,” said QuickChek Vice President of Marketing & Operations Don Leech.

A division of Murphy USA, QuickChek has 156 fresh convenience store locations throughout New Jersey, New York’s Hudson Valley, and Long Island in which consumers can choose their convenience, such as shopping in-store or placing orders through the QuickChek mobile app.

Semper Fi & America’s Fund provides urgently needed resources and lifetime support for combat wounded, critically ill, and catastrophically injured members of the U.S. Armed Forces and their families. Case Managers work one-on-one with Service Members and Veterans to understand and support their individual needs right now and throughout their lifetimes. The Fund keeps its overhead extremely low in order to have the greatest impact on the lives of Veterans and their families, and has been awarded the highest charity ratings among Veteran non-profits: A+ from CharityWatch (one of only two veteran nonprofits to receive their highest rating); 4-star Charity Navigator rating for 10 consecutive years (an achievement attained by only 2% of rated charities); and the GuideStar Platinum Seal of Transparency. Learn more at semperfifund.org.