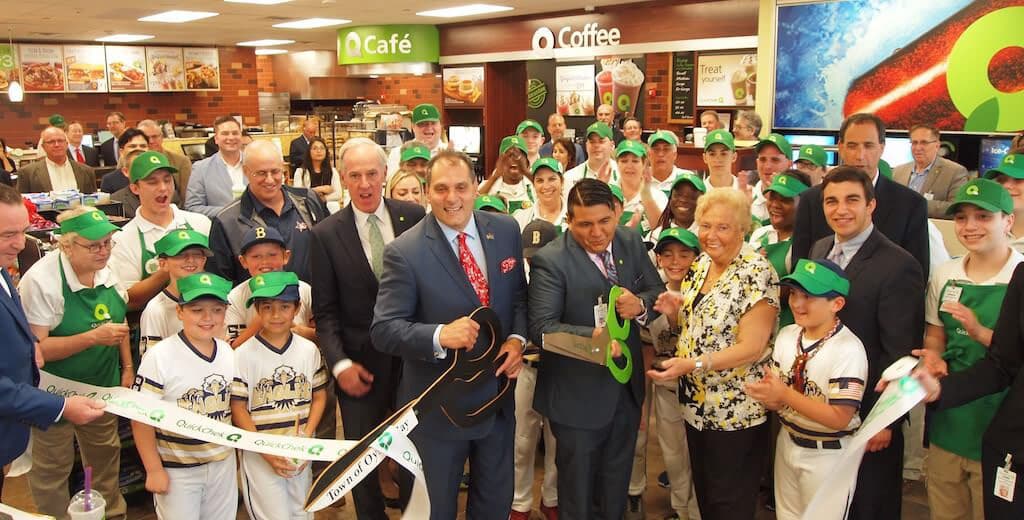 Fresh Handcrafted Food, Best Coffee in America and Fuel All in One Location

QuickChek, a leader in food services with an exceptional fresh coffee and handcrafted fresh food program that has been voted the best in America, is opening its newest store in Bethpage, its first-ever store in Nassau County and second on Long Island.

The fresh convenience market chain will open a new 5,868–square-foot store at 3965 Hempstead Turnpike on Tuesday, May 2. QuickChek is known for being fresh and local, as well as for its coffee, which was voted best in America in a national consumer survey by Technomic in 2014.

The new store will be open 24 hours a day and will feature touch screen technology enabling consumers to create delicious custom-made oven-toasted fresh subs, sandwiches, wraps and salads and personalized hot and cold beverages exactly as they want them, any time of day or night. Amenities include no-fee ATMs which provide additional added value to consumers; indoor seating for 13 people and outdoor seating for eight; six gasoline pumps offering 12 positions for high-quality fuel at value prices; and 39 parking spaces.

Among the grand opening promotions will be free large hot coffee for patrons during the store’s first four weeks from May 2-May 28, 2017 and all 6-inch sub sandwiches will be just $3 through May 28.

In addition to its renowned coffee wall which offers 10 varieties of coffee, up to seven varieties of cappuccino and four varieties of iced coffee, the store features a Q Café where friendly baristas will custom-make more than 60 varieties of handcrafted hot and iced cold drinks, including frozen yogurt shakes, blended-to-order fruit smoothies and fresh-brewed espressos brewed with QuickChek’s Dark Roast espresso beans in regular, decaf and extra shots.

Modern by industry standards, the family-owned company maintains bright clean stores, well-lighted fuel stations and parking lots with wide, easy-to-use entrances and exits that add to a shopper’s convenience. It also continues to expand its mobile ordering menu with extensive savings available on its mobile app to meet the needs of today’s on-the-go consumer.

QuickChek’s opening will have a positive impact on the local economy. The new store creates 40 new local jobs, including eight management positions, and will generate approximately $1 million in tax revenues. It also revitalizes a long abandoned site at the intersection of Hempstead Turnpike and Route 107.

“We are excited to build on the success of our first store in Lake Grove to open our second Long Island fresh convenience market location and our first in Nassau County,” said QuickChek CEO Dean Durling. “Bethpage is a vibrant community. We look forward to serving it by providing the people who live and work here with same high quality and value we have been providing in the metropolitan area for the past 50 years.”

Family-owned QuickChek operates 149 fresh convenience market store locations, including 63 with fuel and 10 with pharmacies, throughout Long Island, the Hudson Valley and New Jersey. The Whitehouse Station, NJ-based chain continues to grow, opening 41 new stores and hiring an additional 1,400 people over the past nine years. It opened its first Long Island store in Lake Grove in October 2014 and will look at future sites in Nassau and Suffolk counties as opportunities arise.

BEST COMPANY TO WORK FOR

QuickChek enjoys the rare distinction of being named one of the best companies to work for in both New York and New Jersey, earning the honors in the Empire State in each of the past five years by The New York State Society of Human Resource Management, and in seven of the past eight years in the Garden State by NJBIZ magazine. The lists recognize top employers who show a dedication to their employees’ growth and quality of life.

QuickChek’s starting pay has been above the New York and New Jersey state minimums for the past eight years. Long term career opportunities abound: all of the company’s district leaders and most of its vice presidents began their careers working in a local store.

“We are committed to being a great place to work, a great place to shop, and a great place to invest,” said Durling. “When you come into any of our stores, the store leader manages that store as if it is their own. This helps them connect with our customers on a personal level, to create that local neighborhood shopping experience, and provide the outstanding customer service for which we are known.”

GIVING BACK TO THE COMMUNITY

Dedicated to its communities, QuickChek enjoys a long history of giving back to the neighborhoods it serves, raising millions of dollars to support a variety of causes benefiting children, families and military veterans.

Current initiatives, which aid thousands of area individuals and families, include Long Island Cares, the Community Food Bank of New Jersey, and the Hudson Valley Food Bank; and Hope for the Warriors, which enhances the lives of post 9/11 service members, their families and families of the fallen. QuickChek stores raised $148,500 for the Check-Out for Hunger campaign during the 2016 holidays and $163,002 in just four weeks for Hope for the Warriors through a company-wide in-store promotion from May-June 2016.

As part of its grand opening celebration in Bethpage, QuickChek will donate $0.25 for every sub, sandwich and wrap sold in the store from May 2-June 1, 2017 to the Bethpage Eagles Little League team.

The company is also donating a pediatric trauma kit to the Bethpage Fire Department. The kit contains special equipment which ambulance personnel may need to properly care for a small child, as well as a stuffed animal for the child. The ingredients of these kits are child-sized and are geared for children from infancy to 18 years of age.

Bethpage Baseball and the Middle Country Youth Association are among the 150 youth sports organizations the company supports throughout the metropolitan area. Other local community supported programs include the Taste of Long Island Festival, the 8th annual Long Island Run for The Warriors, the Museum of American Armor in Old Bethpage, and Brookhaven Fast Pitch.

As part of its grand opening celebration in Bethpage, QuickChek will donate $0.25 for every sub, sandwich and wrap sold in the store from May 2-June 1, 2017 to the Bethpage Eagles Little League team.

Grand Opening promotions include free large hot coffee and free 20-ounce iced coffee offered to all patrons and free 20-ounce fountain or QuickFreeze drinks from May 2-28, 2017.All 6-inch subs are $3 and all handcrafted smoothies and espresso drinks are $1.99 through May 28, 2017.

Consumers can enjoy additional convenience and savings at any of the company’s 149 store locations by downloading the QuickChek mobile app at www.quickchek.com. Loyal customers are also rewarded with a free coffee after they purchase six coffees.