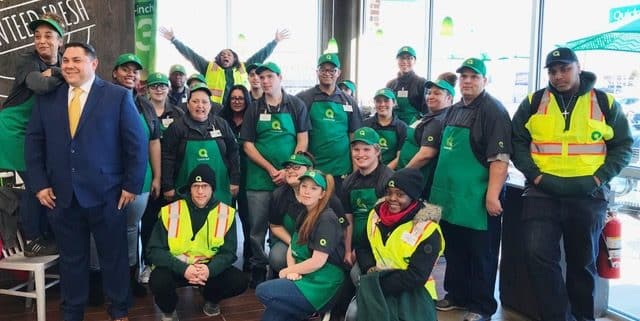 FRESH CONVENIENCE MARKET CHAIN HAS 18 N.Y. STORES WITH MORE ON THE WAY

NEW YORK, NY — QuickChek Corporation, a leader in food services with an exceptional fresh coffee and fresh food program that meets the needs of busy consumers on-the-go, has been named one of the Best Companies to Work for in New York State for the eighth consecutive year.

The statewide Best Companies to Work for in New York State survey and awards program is designed to identify, recognize and honor the best places of employment whose practices benefit the State’s businesses, economy, and workforce. Survey components include employee satisfaction and engagement.

The family-owned company employs more than 4,500 team members and has 160 retail stores including 86 locations with fuel throughout New York’s Hudson Valley, Long Island and New Jersey. QuickChek was named the 2016 National Convenience Store Chain of the Year. Its coffee was voted best in America in a national consumer survey conducted by Technomic.

QuickChek is proud to invest in its team members. The company’s starting pay has been above the New York and New Jersey state minimums for the past 12 years. Career opportunities abound: all of the company’s district leaders and most of its vice presidents began their careers working in a local store.

Full-time employees are offered a wide variety of affordable health and well care benefits including medical, dental and vision, to life insurance, a 401(k) savings plan, fitness center reimbursement, and even pet insurance.

QuickChek continues to buck the current economic trend, opening 34 new stores and hiring an additional 1,450 people since 2015. The privately-held company opened eight new stores in 2019 and is continuing its growth in 2020; each new store creates 45 new local jobs including eight management positions and generates approximately $1 million in tax revenue.

The company’s growth in New York is continuing as it doubles its footprint on Long Island with the recent openings of new fresh convenience market stores in Commack and Bohemia with a new store planned for Brentwood this summer.

QuickChek will be honored at an awards dinner recognizing the 2020 Best Companies to Work for in New York State on May 5 at the Albany Hilton. For additional information please visit www.quickchek.com.